About Us  /  Lyda Moore Merrick 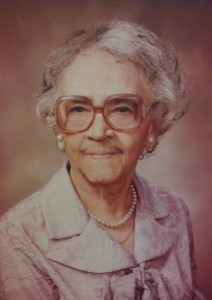 Lyda began teaching private piano students, devoted herself to making portraits and other drawings, and was courted by Ed Merrick, a son of the Mutual founder. Their marriage in 1916 marked an even closer alliance between two of the most powerful black families in the State; the local newspaper called the wedding “a social event of state-wide importance” attended by W.E.B. Du Bois; Charlotte Hawkins Brown, Director of Palmer Memorial Institute; the President of Wilberforce University; and the Mayor of Durham and his wife.

In addition to raising two daughters, Lyda Merrick sang with the Mutual’s glee club and quartet, became active in the Federation of Negro Women’s Club, book clubs, and church circles, and served on the board of the Durham Colored Library.

In 1952 Merrick realized, in her work for the blind, the single greatest challenge of her life, founding The Negro Braille Magazine (later named The Merrick/Washington Magazine for the Blind), the only national publication dedicated to the needs of blind black persons. She served as editor for the next eighteen years. “My father passed a torch to me which I have never let go out. We are blessed to serve” stated Mrs. Merrick in her ninety-second year.

If the North Carolina Mutual is the successful child of Mr. Merrick and Dr. Moore, The Merrick/Washington Magazine for the Blind is the child of Lyda Moore Merrick. John Carter Washington, born blind and deaf, provided Mrs. Merrick inspiration. He began life as a foundling, under the care of nurses at Lincoln Hospital. Dr. Moore brought the baby to Lyda’s home until a foster family could be found for him. Their close friendship lasted for over sixty years. It was at John’s insistence that Lyda began to think about ways of helping their people who were blind, starting with the Library’s Corner for the Blind, and John influenced her decision to begin the magazine.

The Lyda Moore Merrick Community Room at the Hayti Heritage Center is named in Mrs. Merrick’s honor for her dedication and contributions to the Durham community.