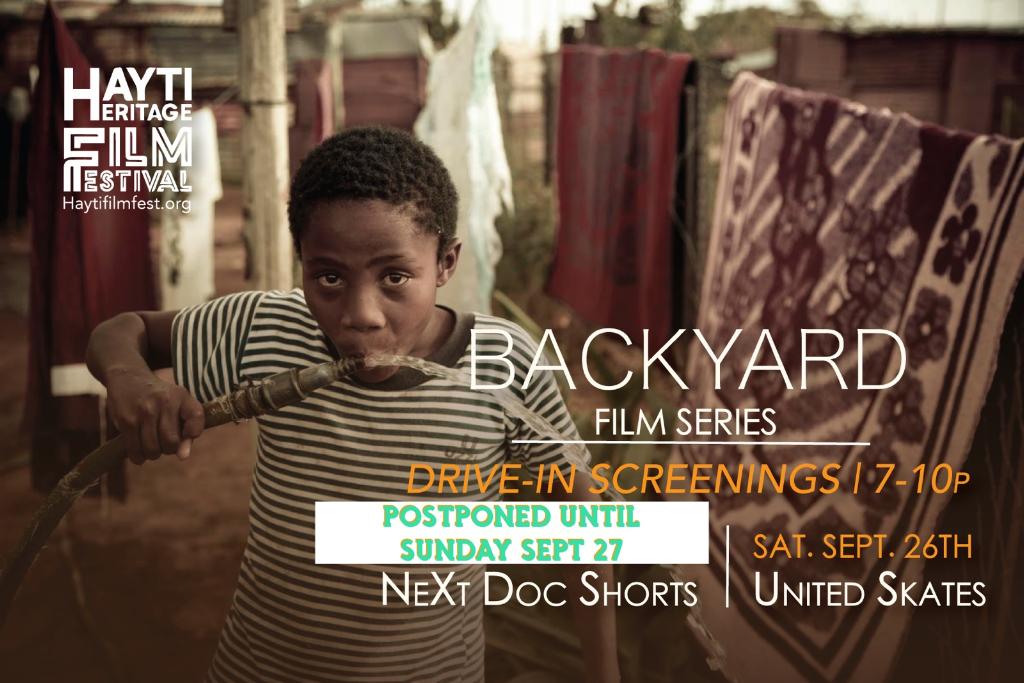 Drive In – NEXT DOC SHORTS TONIGHT,

Friday, September 25 is postponed due to rain.

Saturday, September 26 at 7 PM. Stay tuned for updates throughout the weekend.

As a reminder, the Drive In will take place at Measurement, Inc.

Volunteers will be on hand to direct you to your parking spaces.

How to Enjoy the Drive In and Other Answers to FAQs:

2. Masks and social distancing required when outside or when going to the bathrooms.

3. We do not have access to trash or recycling bins on site. Please BYOB and help us keep the space free of trash.

4. You are encouraged to bring your own food and non-alcoholic beverages.

5. Arrive on time at our outdoor theater and pull in to the lot using the back entrance (look for parking attendant).

7. Turn your lights OFF upon entering the parking lot.

8. We will reschedule in case of rain.

It’s September, but we declare that the summer’s not over yet!

As a part of the Backyard Film Series, Hayti Heritage Film Festival presents a unique drive-in movie experience. Tickets are on a first come-first served basis. ONE (1) ticket per car. Spaces are limited and you must have an FM car radio.

The NeXt Doc Film & Organizing Collective presents: For Us NeXt – a drive-in screening tour uplifting the work of young filmmakers of color about their own communities. NeXt Doc is dedicated to amplifying and supporting anti-colonial practices in filmmaking and building power between emerging documentary storytellers of color and the communities they serve.

For Us NeXt: Durham will include a lineup of short films from the NeXt Doc collective and from young filmmakers of color in Durham, NC. In the age of Zoom screenings, we are hoping to inspire young artists in the area and bring people together to celebrate stories of memory and resilience.

For years, roller-skating rinks have been a constant for African-American communities across the U.S., serving as a meeting ground, a place to have fun and an incubator of iconic hip-hop talents like Queen Latifah and N.W.A.

As America’s last standing roller rinks are threatened with closure, a community joins forces in a racially charged environment to save the underground African-American subculture of roller skating, which has been overlooked by the mainstream for generations – yet has given rise to some of the world’s greatest musical talents.

From executive producer John Legend and first-time directors Dyana Winkler and Tina Brown, the documentary United Skates highlights the dynamic world of roller skating, showcasing African-American rinks and skaters across the country as they fight to keep the culture alive and skate their hearts out. The film features interviews with hip-hop legends like Salt-N-Pepa, Coolio, Vin Rock of Naughty by Nature and World Class Wreckin’ Cru.

United Skates spotlights three skaters fighting for their community: L.A. native Phelicia, a single mom who grew up in skates and hopes to keep skating alive for her children; North Carolinian Reggie, who lives hours from any rink that offers a night for black skaters and vows to launch his own; and Buddy Love, the owner of Chicago-based Rich City Skate, who struggles to keep his rink open, despite financial pressure.

*Link to RSVP for the Backyard Film Series Drive In*