March was Women’s History Month and Hayti collaborated with SOULOWORKS to present an excellent program, [email protected], in celebration. From start to finish this intergenerational celebration demonstrated the power of women past and present.

Thirty years ago the Bull Durham Blues Festival began. As the group Sounds of Blackness sang, “Everybody wants to sing my blues, nobody wants to live my blues.” Those words rang true then, and they ring true now. Among those powerful women whose lives helped shape the blues through music were Bessie Smith, Big Mama Thornton and Ella Baker, all born in March. 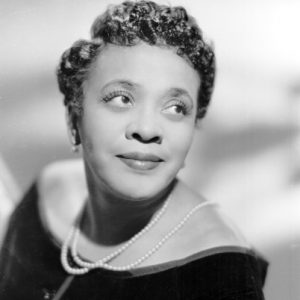 Another woman, born in March, helped shape our notion of the blues through comedy. Jackie “Moms” Mabley was undoubtedly one of the [email protected] whose comedy brought to life what many African-Americans, especially women, experienced during the early to mid-1900’s. Like Richard Pryor, Moms Mabley found a comedic voice for the darkness that was cast on her life at an early age.

The woman who would become known as famed comedian Moms Mabley was born Loretta Mary Aiken in Brevard, North Carolina, on March 19, 1894 to a large family. She experienced a horrifying, traumatic childhood. Her firefighter father was killed in an explosion when she was 11 and her mother was later hit and killed by a truck on Christmas Day. By age 14 Aiken had been raped twice (by and elderly black man and by a white sheriff) and become pregnant from both encounters, with both children being taken away.

Starting in the late 1930s, Mabley became the first woman comedian to be featured at the famed Apollo Theater, going on to appear on the theater’s stage more times than any other performer. Mabley’s standup routines were riotous due to the aesthetic she presented as being an older, housedress-clad woman in a floppy hat who provided commentary on racial bigotry to African-American audiences. Her jokes also pointed towards a lusty attraction to younger men. Loretta Aiken took her stage name, Jackie Mabley, from an early boyfriend, commenting in a 1970s interview that he had taken so much from her, it was the least she could do to take his name! Later she became known as “Moms” because she was indeed a “Mom” to many other comedians on the circuit in the 1950s and 1960s.

Mabley was billed as “The Funniest Woman in the World” even though she tackled topics, such as racism, too edgy for most mainstream comics of the time. One of her regular themes was a romantic interest in handsome young men rather than old “washed-up geezers”, and she got away with it because of her stage persona, where she appeared as a toothless, bedraggled woman in a house dress and floppy hat.

One such joke about preferring younger men was: “I’d rather pay a young man’s way from here to California than to tell an old man the distance!”

Another one: “My old man was so old, one day he went to snap his fingers and broke his wrist!”

On racism: “I don’t ever want to go to Alabama. The Greyhound would take me down there and the blood hounds run me back!”

On health: “Never smoke in bed…the ashes that fall on the floor could be you!”

Moms Mabley lived the blues. In her career that spanned 60 years she reached professional milestones and gained crossover appeal after appearing on the Smothers Brothers comedy show. However, like most African-American artists of her time, she did not make much money. During her career she worked with another North Carolina comic trailblazer, Pigmeat Markham. She performed on stage, in movies, and on television. Her soulful rendition of the song “Abraham, Martin and John” hit #35 on the Billboard Hot 100 in 1969.

Jackie “Moms” Mabley lived the blues; good, bad and ugly. If you don’t know who she is, find out.