A Year with the Jambalaya Slam and Bull City Slam Team 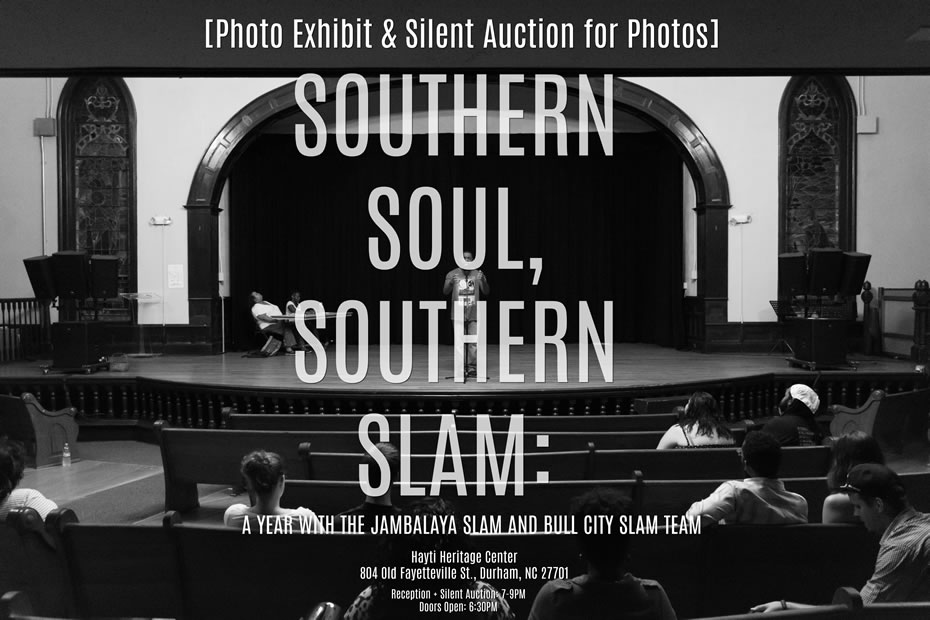 As one of the Hayti Heritage Center’s anchor programs, the Jambalaya Soul Slam Team has rocked the historic Performance Hall every third Saturday night since 2005, attracting audiences of avid fans and performers of spoken word poetry. Since that time the Bull City Slam Team, founded and coached by Jambalaya Soul slammaster Dasan Ahanu, has represented Durham at poetry slam tournaments across the country, reaching the final stages of the Southern Fried Southeastern Poetry Slam and the National Poetry Slam (NPS) on multiple occasions. For over a decade, numerous poets have joined the Jambalaya Soul and Bull City family and shared the way they use words to paint pictures. Now, after so many years, the Jambalaya Soul and Bull City artists will have time for reflection. This time, however, pictures will be used to capture their words.

Curating black-and-white photographs from over a year of documentary work by folklorist-poet Jackson Hall, “Southern Soul, Southern Slam” aspires to be a love letter to the poets who have shaped and sustained the Jambalaya Soul and Bull City spoken word community. Organized across three sections, the exhibition’s twenty-five images chronicle the 2016-2017 Jambalaya Slam Season, follow the 2017 Bull City Slam Team on their journey to Southern Fried and NPS, and feature portraits and brief auto-biographies of each 2017 team member.

Excluding the portraits, each photograph will be available through a silent auction dedicated to raising money for the Bull City Slam Team’s travel expenses in order to help future poets gain the opportunity to represent Durham by shining on poetry slam’s grandest stages.